Here is the last Write-Up for the #MVS2020CTF.  During the live competition, I wasn't aware of any "free" tools to analyze iOS systems, so I fell back on Cellebrite PA and was able to find several flags quite easily.  After the live event, I found out about #iLEAPP by @AlexisBrignoni and re-processed the iOS data.  This allowed me to try out a new tool and gave me an opportunity to validate the flags found with PA and iLEAPP, since both tools were generating the same answers.  This post will focus on the flags found with iLEAPP to continue with the #OpenSource theme for the #MVS2020CTF.  I will have a more detailed post in the coming weeks regarding creating new artifacts for iLEAPP and ALEAPP (the Android parsing tool by @AlexisBrignoni).  Without further delay here are the flags that I was able to find.
Once again a huge thanks to the folks at Magnet Forensics for putting on a great virtual summit and for putting together a CTF that focused on finding some pretty unique artifacts as flags and encouraged the use of #OpenSource tools.
What's the Apple ID email associated with this device
Flag should look like: flag<sally@mail.com> (Don't include flag<>)
After running the iOS extraction through iLEAPP, we open the main index file for the full report.  Looking at the Accounts - Account Data we see the flag for the Apple ID as abrunswick8675309@gmail.com.

What tool was used to perform the acquisition on this device? Note: You only have 1 attempt
EnCase
Magnet Axiom
Mobile Evidence Acquisition Toolkit
Cellebrite
Based upon the inclusion of the MEAT Log, the flag for this question is Mobile Evidence Acquisition Toolkit.
What is the name of this user's favorite city in Apple Maps?
The flag for this question was Loserville, but I don't remember where I found this flag.  I found this early on before I decided to start a blog and started documenting the process of where the flags were found.
What medication is this user currently on?
This flag can be found searching "Medical" in Cellebrite to get the Medications; however it could also be found with a search of "Medical" in Windows Explorer, which brings you to private\var\mobile\Library\MedicalID\MedicalIDData.archive.  Open this file in Notepad ++ and you see that the medication is Lysergic Acid Diethylamide. 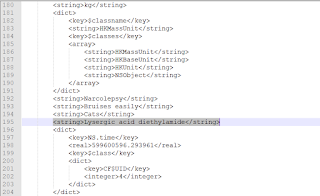 What's the name of this device?
So this could actually be found in multiple places in the iLEAPP report.  First it can be found on the Report Home page and then the Device Details Tab as shown below.

The second location within the iLEAPP Report would be under the Data Ark Artifact along the left side of the report.  The flag is Alan's Fantastical iPhone 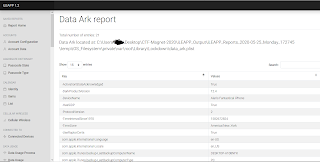 What is the company associated with the contact "Chester Russell"?
This was another flag that was found early on and I only found it in the Cellebrite PA Report.  In the contacts section you can see that Chester Russell has the company "APT802" listed.
How many seconds did the user have Safari open between the hours of 12:00:00 and 20:00:00 on March 23rd, 2020?
Only enter the number
I did not find the flag for this question.
Looks like a MineCraft server was hosted on this device?? Find the username of a player who has joined
For this flag it was more of a manual process.  I started by using the search within Windows Explorer to look for "Minecraft" within the iOS extraction.  This produced a result of a settings.ini that let me to the directory of usr\dev\cuberite\Server\Players\67\ where there was a .json file.  I opened the .json file in Notepad++ using the JSON plugin and found the flag of
"Thad_Castle_" 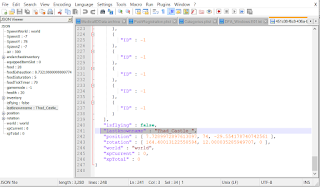 What is the first IP address that this user targeted via a popular hacking tool?
I didn't find the flag for this question, but after reading other Write-Ups I see where I overlooked the bash history for the app.
What is the Tag ID of the scanned NFC tag? Remember MC questions have a 1 attempt limit
377EE22E104347
AD2A7A3E3C63F7
96C8E50757329E
E5DB5FE6A6984D
041146220F5E80
2D52E5017D690E
64DCD00FD51BFB
64DCD00FD51B03
925F65AC9786B6
I did not find the flag for this question.
This user's Spotify playlist is looking a bit suspicious..?
So this one took up quite a bit of time, but ultimately did not find the flag with the iOS data.  While searching for a different flag, I came across several Twitter Direct Message notification emails in the Google Takeout Mbox file. 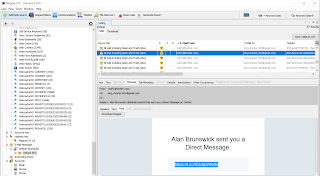 There was mention of Spotify, so I started to follow the links sent in the DM email notifications and landed on a Spotify playlist. 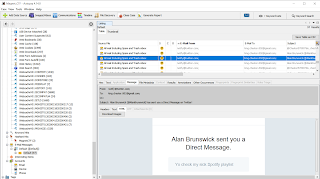 The flag is comprised of the three songs on the playlist "

What is the name of the computer that was used to sync with this device?
This flag again can be found in multiple places.  One place is again iLEAPP Report Home on the Device Details Tab.  The second place is the Connected Devices Report.  The flag was DESKTOP-A108NFK.

Here is the last Write-Up for the #MVS2020CTF.  During the live competition, I wasn't aware of any "free" tools to analyze iOS...